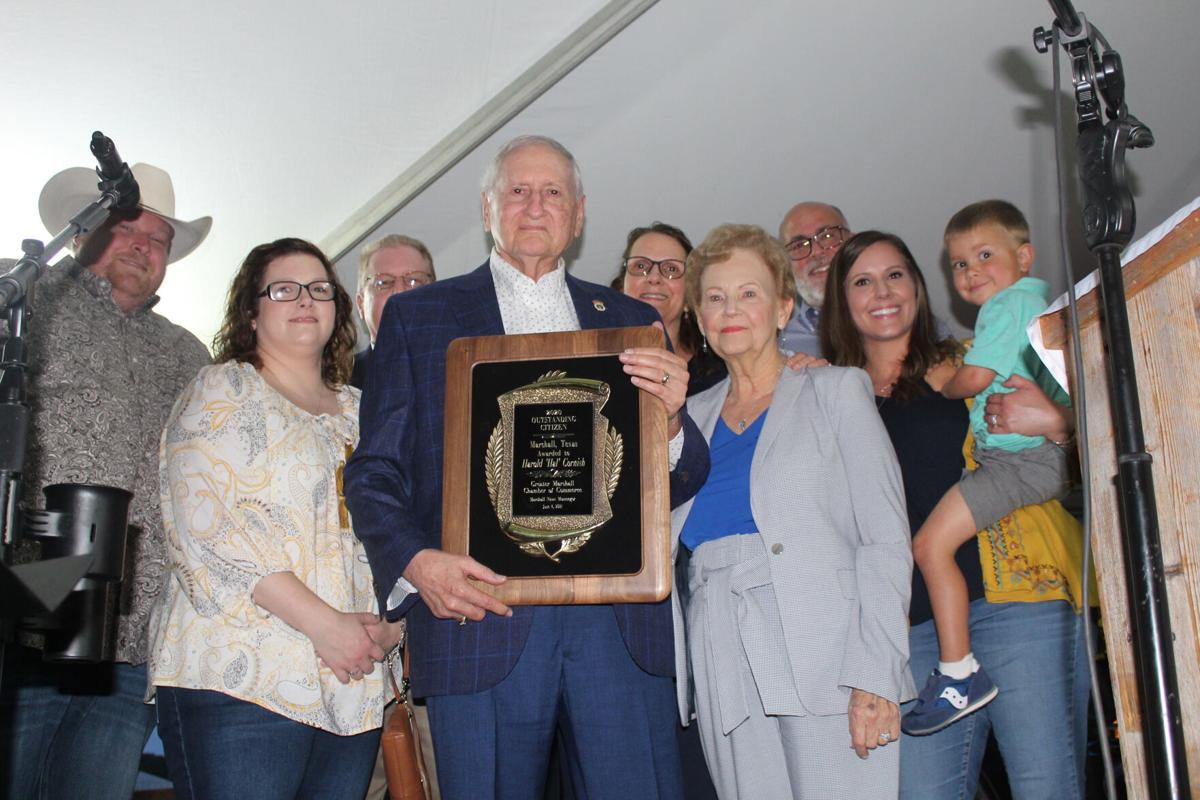 The annual Greater Marshall Chamber of Commerce banquet took place Friday, with community members gathering at Bear Creek Smokehouse in Marshall for a night outside under the stars.

Stormy weather didn’t deter everyone from gathering for the annual event, with Executive Director of the chamber Stacia Runnels stating that the event turned out even better than expected.

“We had very high hopes for this year, and even we were surprised at how well everything is going,” Runnels said. “We are just so grateful for everyone coming out, and we are so happy to be back together with everyone.”

The banquet kicked off at 5:30 p.m. with a social hour and silent auction before dinner was served at 6:30 p.m., which was catered by Bear Creek.

Congressman Louie Gohmert was in attendance at the event, giving the invocation before the annual awards were presented.

Runnels then announced the award winners.

AMBASSADOR OF THE YEAR

Judge John Oswalt was named as this year’s winner of the Ambassador of the Year by the chamber. Oswalt served as a volunteer firefighter for over 30 years with Harrison County ESD 3. He has also volunteered with the chamber for a number of years, while simultaneously serving as a justice of the peace and many other duties.

Oswalt is a 27 year member of the Marshall Elks Lodge, and was elected Texas Elks State Association President for 2017/2018, representing Elks across Texas and serving as ambassador for the state. He was also awarded the President’s Volunteer Service Award, an award bestowed in recognition of outstanding volunteer contributions and community service to the United States of America.

A lifelong resident of Marshall, and a graduate of Marshall High School and Kilgore Junior College, Oswalt has spent his entire life serving the East Texas area. He currently has a wife, Renea, and is the step father of Russell Stuart, Jeff Stuart and Tabitha Robinson as well as their respective spouses. Though he was not present to accept the award due to prior obligations, his family was honored to step in on his behalf when the award was presented.

CITIZEN OF THE YEAR

Hal Cornish was selected as this year’s winner of the citizen of the year award. Cornish was nominated for the award by seven different people, representing four different entities in the community.

Cornish was a captain in the U.S. Airforce Reserve, moving to Marshall in 1984 with Thiokol Longhorn Ammunition Plant. Since moving to the area, Cornish has served with the Marshall Rotary Club, the chamber of commerce, and on the Marshall EDC board of directors.

He is also a long time member of the Marshall Regional Arts Council, and has served as Past President of the East Texas Baptist University Board of Associates, past Chairman of the ETBU Board of Trustees, Past President and Charter Member of the local Boys & Girls Club Board of Directors, Past District Chairman of the Boy Scouts of America and on the Board of Directors of Marshall Festivals, Inc.

Both Cornish and Oswalt were presented state flags flown over the capitol building by Rep. Chris Paddie’s office.

Tim Huff of Marshall Homecare and Hospice was named as one of the chambers shining star award winners this year. Huff was recognized for his years of service in the Marshall community, but especially for his service last year during the COVID-19 pandemic.

Last year Huff organized blood drives, canned food drives, toy drives and even fan drives for the elderly. He brought bird feeders to nursing homes to entertain lonely senior citizens, cooked meals for law enforcement to say thank you, and assisted with events such as the Walk to End Alzheimers and Touch of Pink.

The second winner of the shining star award this year was the Marshall Harrison County Health District and Director Jennifer Hancock and her staff, Lea Ann Smith, Laura Reyes, and Norma Jaimes.

The health district was honored for their work during the COVID-19 pandemic, serving the entire county with a small team, this group was able to distribute over 6,000 vaccines, on top of keeping the public up to date and informed on the ongoing crisis.

County Judge Chad Sims said of the group, “This was no small effort. Tremendous work behind the scenes to arrange for vaccine delivery and storage, facility setup (mainly at the convention center), staffing all positions to make the vaccinations efficient and seamless, and countless hours of entering the data into the state’s vaccine database resulted in a highly organized and efficient distribution of the vaccine by (this group). Not only that, but tonight’s honoree handled all of the extra labor with very little additional impact to (the) budget. That’s just short of miraculous.”

Robert Coleman was selected as the third recipient of the shining star award at this year’s annual banquet.

Coleman was recognized at the banquet for his volunteer work during the COVID-19 pandemic, namely with the creation of the Facebook group Marshall Delivers, which became a hub of information on local businesses.

Coleman and his co-workers and a large group of volunteers also worked with area small businesses, namely restaurants, to deliver meals to designated locations in the city and county during the pandemic.

He also assisted with the 2020 opening of the Harrison County Farmers Market, partnering with local businesses to help provide masks and gloves to the market participants.

After awards were presented, guests were treated to live music and dancing under the stars.